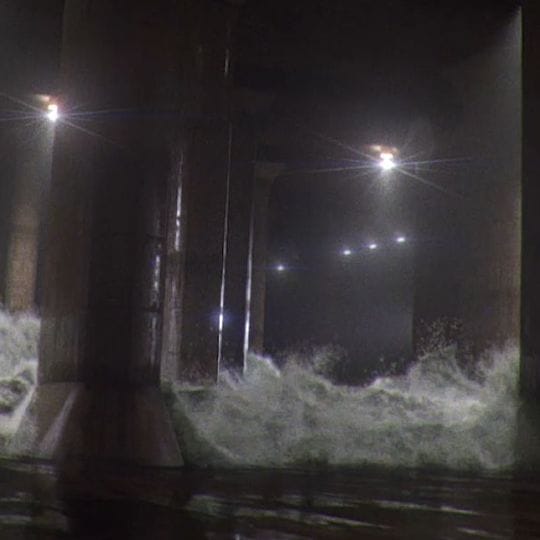 Located just outside Tokyo, Japan, the Metropolitan Area Outer Underground Discharge Channel is designed to divert flood water away from the city. It’s a truly epic construction, consisting of five 64-meter high silos, each capable of holding the Statue of Liberty, 6.4 km of tunnels, and a cavernous 25-meter high, 177-meter long water tank, with 59 huge columns to support the ceiling and slow the flow of water.

At full capacity, the facility is capable of pumping 200 tons of water per second away from Tokyo and into the Edo River. When not in use, the main tank is open to visitors, and it served as a setting for The Hunger Games: Mockingjay – Part 2.

When CG Artist and VFX Supervisor Jonas Ussing first saw the tank’s cathedral-like design, he was enchanted. “Someone posted a series of photos on CGTalk, asking: ‘CG or real?’” he explains. “A lot of people thought it was CG because it looked so surreal, like a modern Mines of Moria. I was fascinated by it, and also wanted to expand my environment reel, so I thought it would be a good exercise in photorealism through modeling, lighting and rendering.”

Thanks to the main tanks’ repetitive geometry and angular surfaces, Jonas was able to model a photorealistic digital recreation in very little time. But one thing was missing: the tons of water which would sweep through the main tank in flood season. Instead, Jonas settled on a few puddles created with V-Ray materials, and the project has sat in his archives for the last nine years.

After some experimentation with Phoenix FD for 3ds Max, Chaos Group’s fluid dynamics simulator, Jonas realized he had unwittingly created the perfect testbed for a large-scale water simulation, and he dug the model out of the archives. Thanks to the design of the facility getting the water to flow through it was fairly simple, and he used foam settings from Chaos Group's Phoenix River Tutorial to get the water looking as it should. There were a few additional tweaks, though.

“Water in real life doesn't give you the 'splashing wall of water' you've come to know from disaster films,” says Jonas. “It flattens out real quick, so I had to do one cheat and a little R&D. I used Phoenix's Initial Fillup to fill the pool with a few inches of water, which makes the front of the tsunami constantly stop, splash and tumble over itself in a very cinematic way. And then the render floor — which doesn't interact with the simulation — is a few inches higher, to hide the fillup.”

Jonas' water simulation on its own, with the initial fillup visible at the bottom.

With a water simulation of this size, the density of Phoenix FD's voxels can become an issue. Larger voxels look great for the overall sim, but they become visible if a splash comes very close to the camera. Reducing the voxel size across the whole simulation means they look better up close — but this also leads to a massive overall increase of voxels. Instead, Jonas used a smart technique to get the best of both worlds.

"To overcome this, I simulated three separate high-res splashes of water against the pillars, and added those in comp," he explains. "Because of the limited size of the splashes, I could afford to simulate them with a much higher density, and they add the extra detail where the larger sim needs it. As a side effect, they also cover the fact that the original sim was cropped by the upper border of the voxel grid."

Chaos Cloud was so fast it literally saved me months of rendering.

With the modeling and simulation ready to go, Jonas turned to Chaos Group’s Chaos Cloud service for rendering. Initially, the service couldn’t render interactions between the Phoenix simulations and the environment such as reflections, shadows, and occlusion from the water. However, a recent update brought this ability to the service, and Jonas could run the Phoenix simulation on his local computer, bake it into his scene file, and submit the job as a beauty pass with water, environment and 3D motion blur.

Jonas found Chaos Cloud stable and easy to use. “There are no problems with textures or other assets, you just click the ‘cloud render’ button from the V-Ray toolbar and, after a submission window, you go to the browser interface to monitor the job,” he explains. And thanks to its Google Cloud Platform architecture, the service is quick and secure. “It was so fast it literally saved me months of rendering. I don't dare to begin calculating what it would have taken on my own setup.”

After his watery based experiments, Jonas' next project will put Phoenix FD and Chaos Cloud through their paces — this time with some big bangs. “I'm going to let the farm off for a few weeks, and then I'm going to see how well it responds to large explosion simulations.”

Chaos Cloud: The Story Behind the Tech

Find out how Chaos Group has built a fast, smart and easy cloud rendering service.