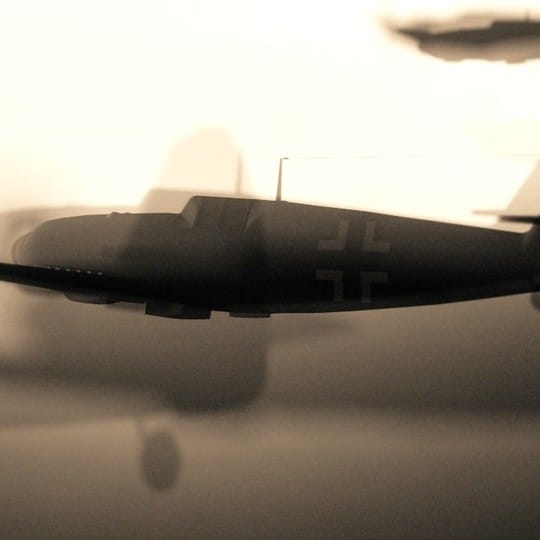 Framestore’s William Bartlett knows title sequences inside-out. When we last spoke to him, he’d just completed VFX supervision on the opening for James Bond adventure “Spectre.” But, with four Bond titles under his belt, William thought he was ready to move his career forwards. “I’ve been doing visual effects for 20-odd years, and I felt it was time to try my hand at directing,” he says.

As a five-part television series, the requirements for “SS-GB’s” title sequence were a little different to Bond’s. Bond titles often hit the four-minute mark, which is unusual even for films. SS-GB’s small screen presence also applied to the title sequence length—just under 90 seconds.

For the most part, William worked alone on the “SS-GB” sequence. “It was the first job in a decade where I was doing everything,” he says. “There was no one else helping. In fact, I really took it to extremes to make it cost efficient. I shot everything myself on a Canon 5D, I lit it all, I edited it all. The whole thing was a one man band process.”

The “SS-GB” sequence features occasional shots of the principal actors, as well as extras in 1940s garb and Nazi uniforms, and it closes on a close-up of Sam Riley. To shoot this footage, William set up a green screen in London’s St Martin’s College, a now-vacant building which served as the series’ set. William would get a call when the actors were free, throw his trusty 5D in his backpack, and cycle from Framestore’s Soho HQ to the location

Key to William’s single-handed approach to the title sequence was V-Ray for Nuke. His use of the software to create the shattered imagery in the Spectre title sequence had planted a seed, and he wondered where else he could use this unique and adaptable tool. Thematically, “SS-GB’s” murky, deceit-laden world suggested shadows and dark areas — which is exactly where V-Ray for Nuke came in.

“You’re never quite sure who’s on whose side, and there’s a lot of people making deals with different people,” says William. “I had this idea of the shadowy world as something that could be quite evocative of the themes of the series. When I’d been using V-Ray to do the Bond titles, I played around with some of the shadow casting features. When this title sequence came along it felt like an opportunity to really go to town with that tool."

As William points out, casting shadows with 3D software is nothing new—it’s been a crucial part of photorealistic imagery since the early days of CG. But to create the kind of volumetric shadows William wanted for the “SS-GB” sequence would have been an arduous process of rendering, realizing it doesn’t look right, then re-rendering. As with his work on “Spectre,” it’s V-Ray for Nuke's quick iterations that made it an essential weapon in his arsenal.

“With “SS-GB,” we needed to alter it hundreds and hundreds of times, make the shadows a bit more dense, or a bit less dense, and find a balance between the shots,” William says. “You just can’t work that way if you have to wait hours for the render. You need to be able to do it in minutes."

V-Ray for Nuke gives us opportunities we didn’t have before. It’s such an exciting tool to grow these sorts of projects.

The “SS-GB” title sequence is exactly what a title sequence should be: a tidy exploration of the themes of the show, a hint of the characters and locations and music we’ll get to know, neatly packed into just a minute and a half of screen time. What makes it unusual is that it even tells part of the TV show’s story.

The triumph of Germany in the Battle of Britain would have been prohibitively expensive to film, but William was asked if he could work it into the title sequence. “It was not something they could film, but it was so crucial to the story,” says William. “We showed it at the beginning of the sequence, with the planes. The idea is that Germany is invading, and three plucky British planes are trying to resist the might of the Luftwaffe, and then get shot down."

Telling the story this way is an innovative idea, and one which reflects both Framestore and William’s desire to shift from a VFX-based service provider to a creative services agency. And SS:GB has been successful: 8.5 million people tuned in for the first episode, and William won the Titles & Graphic Identity award at this year's BAFTA TV ceremony.

Now, William expresses a desire to create work in virtual and augmented reality—but he’s really enjoyed the creative freedom the SS-GB titles have given him.

“It's a bit like what music videos used to be 10, 15 years ago, where you were free to do what you wanted,” he says. “There's not a whole hierarchy of people involved. It's just a couple of people, the director and then straight to the producer or director. They can be as abstract as you like, or literal. It’s an interesting creative genre to work with."