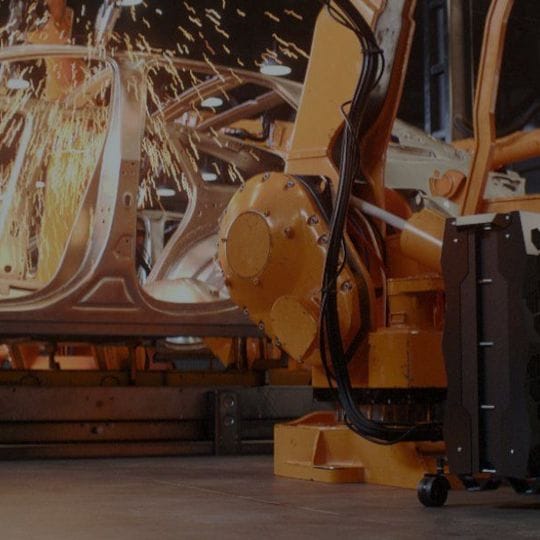 With an impressive CG portfolio that's racked up over 350 million hits on Youtube, VFX studio Lunar Animation does it all — from cartoon cats to VR space battles

In just three and a half years, Lunar Animation has established itself as a world-class VFX and animation studio. Its trailers produced for Outfit7's Talking Tom games have clocked up to 350 million views on YouTube. Its work for Dark Rift entertainment is gritty, stylized and cinematic. It’s created intense VR experiences, and accessible technology commercials.

The company was founded in Sheffield, UK by animation graduates and pals James Rodgers and David Deacon, together with James Sylvester. A shared background in animation was a starting point, but the company that most inspired Lunar is Blur, the company that’s turned game trailers into an art form, and moved into feature films. “We were always really excited to see the latest Blur trailer,” says Rodgers.

As a starting project for an animation company, game trailers are the perfect medium: they’re short and snappy, but they’re a great chance to demonstrate 3D know-how and hone storytelling skills. “They feature some of the highest standards in animation,” says Rodgers. “We got a kick from it, and realized it was an area we were passionate about.”

With a goal in place, the company put together a spec trailer. “WAR” showed the kind of work Lunar was seeking — a gritty, post-apocalyptic shooter which pitches a human army against alien invaders. It demonstrated the company’s skill at motion capture, rendering, storytelling, and collaboration with a sound designer and composer. And it worked — game trailer work came thick and fast.

Occasionally, Lunar even ends up contributing to the games themselves. “We request game assets so we can use them as a jumping off point,” explains James. “But sometimes we work on a trailer so far ahead of the game that a lot of assets don't exist. When we were working on Embers of War, the leader of the robots hadn't been created, other than half a sketch one of Dark Rift guys had done. We took that design as inspiration, developed the character, built the asset — and it ended up in the game.”

Becoming a VR Space Pilot without Getting Sick

Related to Lunar’s game trailer work is its partnership with Immotion. This company delivers immersive VR experiences by teaming headsets with “cinema pods,” which tilt, rotate and elevate in synchronization with the CG experience. Lunar’s first project, Delta Zero VR, is a 4K 60FPS Star Wars-like journey through space, with everything from asteroid fields to space battles.

“We've been hesitant with VR,” says James. “There are so many different platforms, and there are still issues around motion sickness. But the Immotion platform helps solve that sensory mismatch between your eyes seeing movement and your body staying still.”

Lunar has worked in sci-fi, fantasy and cartoon worlds — but it doesn’t end there. Its ICEOTOPE commercial brought it back to reality and product design, albeit with a bit of kit straight out of a sci-fi movie. This clever computer cooling technology works by removing fans from motherboards and graphics cards, and plunging everything into a sealed case filled with dielectric liquid which won’t short circuit or cause rust.

“It’s a project where we had 95% control,” says James. “We realized that a commercial project like ICEOTOPE is not a million miles away from a well-told story with characters. It’s about keeping people engaged, and making sure the pace of the visuals and everything fits together, and that the message is there.”

Lunar initially tried various methods to scan in a motherboard to create a photorealistic CG representation, but the intricacies of capacitors and heat sinks made it difficult. Instead, the team modeled a motherboard from scratch. Displaying the tech against pure black and white backgrounds created additional problems.

“It’s challenging when you don't have anything in the environment to reflect,” says James. “But we would look at how Apple is doing it. I know a lot of that stuff is actually photographed — but so what if it is? Let's start with how it's being done best.”

V-Ray for Maya out of the box was awesome. It enabled us to render high-quality hair shading, and characters with displacement mapping much faster. Having the ability to natively render VDBs massively improved our FX pipeline.

The Tech Behind Lunar’s Next Moonshot

With such a huge variety of projects, Lunar needs a solid pipeline which will handle everything they throw at it. When the company started up, they worked on projects in Maya, then exported them to Modo for rendering — a solution which worked until it had to process complex geometries, such as hair. Again, Lunar looked to the best to find a new renderer.

"We needed to come up with a new solution that would allow us to do bigger things," says James. “We saw the work Blur were doing with V-Ray, and the potential there. We did some tests with it, and decided that was what we would use, moving forward.”

Lunar co-director David Deacon echoes James’ thoughts. “Out of the box, V-Ray for Maya was awesome,” he says. “It enabled us to render high-quality hair shading, and characters with displacement mapping much faster. Having the ability to natively render VDBs massively improved our FX pipeline.”

Lunar, then, is aiming for the moon — and it looks likely to hit it. Next in the company’s pipeline is another game trailer, and an in-house project. But its still got its eyes on the top spot of the animation industry. “I want us to be creating the big unveil trailers for E3, things like that,” says James. “We're three and a half years in — let’s see what happens in the next three and a half years.”