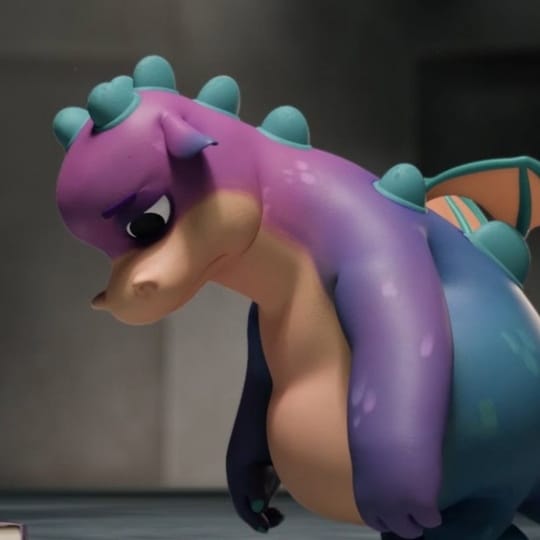 How to render your dragon (with Chaos Cloud!)

Animated short "Dragon Recipes" tells the tale of a young witch who attempts to conjure up a fierce, fire-breathing flying lizard — but ends up with something a little different. It's a cute, charming story about the benefits of learning from mistakes and making the most of unexpected results.

To concoct the movie, director Maria Pavlou and her Cyprus-based animation studio made use of a more dependable set of ingredients — V-Ray for Maya and Chaos Cloud — which gave satisfying results every time. And, with real-time playback, Maria could check everything was bubbling along nicely before delivering the final result.

Here, Maria explains the creative process behind the short film and tells us the multiple advantages of rendering on the cloud.

Chaos Group: Why did you set up Pixel giants?

Maria Pavlou: We founded Pixel giants so that we could create original animated IPs under one roof. We aim to push the animation industry in Cyprus forwards by working with local talented artists and freelancers from abroad. We developed the first global kids’ IP out of Cyprus, the animated TV series Magic Molly, which we pitched at Cartoon Forum last year. Our short film “Dragon Recipes” is our latest release, which started its festival journey in July.

How big is the team?

MP: We are five core people and we easily grow up to 20, depending on the project. Our network of artists is growing steadily, with freelancers from all over Europe with multiple Emmy and Annie awards and nominations under their belt. We count on teamwork and we nurture it; good things can only happen with the right team players who share a common passion and a little bit of craziness!

You can find the complete credits for everyone who worked on "Dragon Recipes" here.

What’s the media and entertainment industry like in Cyprus?

MP: The industry is small but hard-working. There are many talented directors and animators in Cyprus, who make their movies and animated films with local and EU funds. Slowly but surely, Cypriot films make it to big festivals, proving that they can compete on an international level. Furthermore, Cypriot studios accept more and more internationally commissioned projects, which put Cyprus on the map as a service provider. Our filming locations, the weather and newly established tax incentives make Cyprus a great destination for international filmmakers. We believe that our animation industry will flourish and that Pixel giants will play an important role in shaping its future.

You use traditional mediums alongside digital ones. What are the advantages of this approach?

MP: By getting our hands dirty, we don’t forget where we came from: Our roots! We are all traditional artists who embraced technology during our studies and always trying to incorporate traditional techniques where possible. This gives us the flexibility to shift our styles and give a fresh look to each project. We are also very excited by Non-Photorealistic Rendering (NPR), which is something we’re experimenting with for an upcoming project.

MP: Our own kids and their fascination with witches and magic spells. We like characters that are not perfect and make mistakes. We really wanted to make a fun film for children, with a little bit of a moral message in the end.

Maria tells us how storyboards took "Dragon Recipes" from sketch to screen.

"The first draft was quick line drawings done in Harmony. The first animatic was over eight minutes without credits and the story was slightly more complicated with more liquid simulations and FX. On the way, we did the color scripts and started rethinking the flow of the story. The FX were going to cost way over budget, so we decided to change the story and remove a big chunk of the FX."

"One glorious morning, I sat down at a café with Neofytos Neofytou, my business partner, and we cut it down over unlimited coffee refills! We edited the existing animatic in Premiere and redrew new panels on-the-spot in Photoshop, as we didn't have time to redraw everything in Harmony. Long story short: We used all the original storyboard panels plus the quick stick figure changes we made — with tears in our eyes!"

"It proved to be a very smart move since we would quickly run out of money and time with the original longer version of the film. From that point on we stuck to the storyboard by 99% with a few minor edits in layout. Everyone in our team worked hard, with love and passion to get the film up to that point, so that we could move into character animation. As far as color scripts go, we diverted from them a bit as we decided we wanted a darker look for the film. We did many tests with V-Ray to get to the final version."

How did you look-dev the characters?

MP: Look-dev took months and months to achieve! Our Art Director really pushed the envelope on the look of both characters. Nothing was off-limits in early development. And this is where traditional art came into play: Many hand-drawn designs and paintings led to hand-painted textures later on by Neofytos -- who also handled the rendering on Chaos Cloud. We were not afraid to throw things away that did not work and try again until we were all happy with the look. V-Ray, of course, played an important role in putting all the ingredients together to make the perfect recipe!

We just installed the plugin for Maya, logged in and we were ready to go.

How easy did you find it to integrate Chaos Cloud in your workflow?

MP: It was extremely easy since there were no special setup requirements. We just installed the plugin for Maya, logged in and we were ready to go.

What difference did it make to your render times?

MP: It made a huge difference because Chaos Cloud gives its users the ability to use many CPUs at the same time. An average frame from the film took 45 minutes to one hour to render on our systems, but with Chaos Cloud, we had a complete scene rendered in less than 30 minutes!

Were there any additional features you made use of in Chaos Cloud?

MP: Real-time playback really is a fantastic feature! It means we can playback the scene before we download it fully rendered from Chaos Cloud. This way, we can make sure that the animation, textures, lights and shadows are correct. If there is something wrong with the rendered frames, Chaos Cloud gives us the opportunity to resubmit a whole scene or part of a scene, without wasting time downloading it first.

Chaos Cloud is by far the simplest, most reliable and carefree way to render. It feels great not to worry about finishing the rendering on time!

Did Chaos Cloud make it possible to do anything you hadn’t done before?

MP: With the help of Chaos Cloud, it is simple to render heavy scenes. The service also offers huge amounts of space to keep our frames stored, until we decide to delete them. We have used different render services over the years, but Chaos Cloud is by far the simplest, most reliable and carefree way to render. It feels great not to worry about finishing the rendering on time!

Sketches for the mysterious book in "Dragon Recipes."

What are the advantages of being able to log in to Chaos Cloud from anywhere?

MP: A lot of times we have to be in meetings outside the office or in another town, but we can always check if a scene is rendering okay. We have access to Chaos Cloud 24/7 from anywhere in the world. This way, the service frees up a lot of time and most of all, it offers peace of mind!

What’s next for Dragon Recipes?

MP: The film had its premiere at Animafest Cyprus last July, where it received the first prize in the National Competition. It is now ready to embark on its festival journey, with its next stop at Cinekid in Amsterdam. You can follow its progress on the film's website. We couldn’t be more excited about where the film might take us next and we thank Chaos Cloud for making this possible!

Find out how Chaos Cloud can deliver renders faster than you can say "abracadabra!" with 20 free credits.